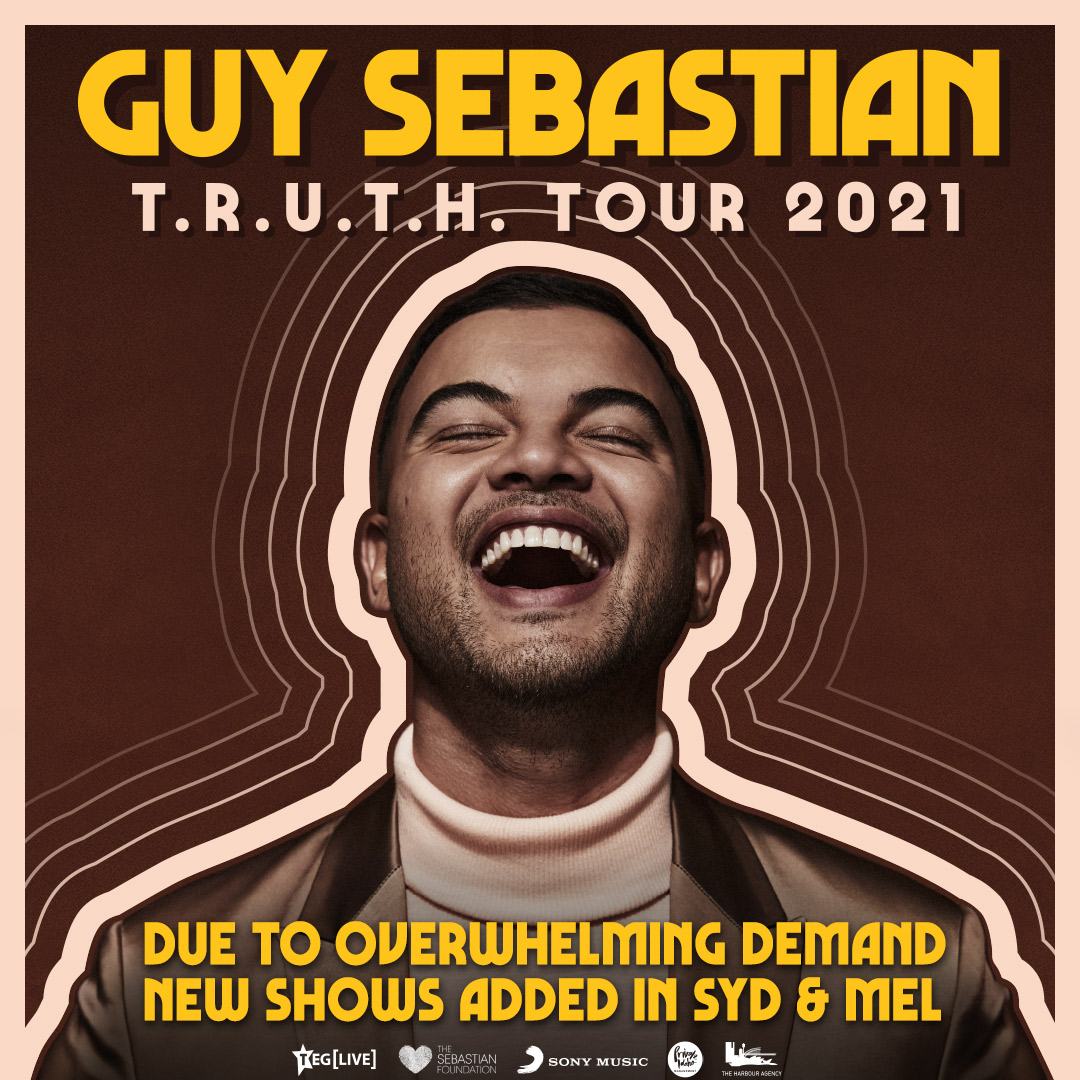 TEG Live proudly presents ARIA award-winning singer-songwriter Guy Sebastian on his national T.R.U.T.H. Tour, which will see Guy bring his new album to life all across Australian capital cities and regional areas from November 2021, with tickets on sale from Friday 16 October 2020 at 2.00pm (local time).
Following the huge success of Guy’s 2019 sold out Australian ‘Ridin’ With You’ Tour,  the T.R.U.T.H. Tour will see Sebastian return to the road in November 2021 for his biggest tour yet, stepping into arenas across the nation. The tour will commence on Thursday 4 November 2021 at Newcastle Entertainment Centre before taking to Brisbane, Gold Coast, Wollongong, Sydney, Bendigo, Melbourne, Hobart, Perth, Adelaide and Cairns before the final show in Townsville on Wednesday 1 December.
Of the 2019 Ridin’ With You tour, the Daily Telegraph’s Kathy McCabe said,’[Sebastian’s] voice is undisputedly one of the finest to emerge in Australia in the past two decades. Yet it’s the strength of his songwriting and natural-born performer personality which truly shines in this show.’
On the 2021 tour, fans will see for themselves how Sebastian shines. They will be treated to a collection of Guy’s biggest smash hits including ‘Bloodstone’ and global hit ‘Battle Scars’, as well as brand new music from the T.R.U.T.H. album including ARIA Song Of The Year & 4 x platinum mega smash ‘Choir’, the defiant ‘Before I Go’, new single ‘Love on Display’ and the mesmerising power ballad ‘Standing With You.’
The T.R.U.T.H. Tour will be Sebastians biggest production yet and promises to bring fans together for an unmissable night of Guy’s biggest songs, big ballads, amazing musicianship, heartfelt stories and of course, lots of dancing, joy and charismatic charm that is Guy Sebastian.
Sebastian says he is excited to be back doing what he loves; entertaining and bringing new music and fan favourites to audiences across the nation.
“I am so pumped to hit the road in 2021 for the T.R.U.T.H. Tour. Performing live and bringing my music to fans is one of my favourite things to do. These last 12 months have been so challenging for so many Australians. Firstly, I just want to be able to take people away from the stresses of their lives and share some special time together. Of course, it will be fun to perform my new songs but I promise there’s going to be lots of songs to enjoy that everyone knows! I have missed playing live so much! For me, touring is the most rewarding part of being a musician – connecting with an audience, getting people up out of their seats and seeing the joy that music brings, there is no greater feeling.”
“It will be incredible to be back on stage in some of my favourite cities across Australia.”
“I am also so excited to share that $1 (plus GST) per ticket sold will be donated to The Sebastian Foundation who are doing a lot of work in the space of adolescent mental health which is so critical at the moment so you can feel doubly good about nabbing a ticket. You can check out the work we do at The Sebastian Foundation,” Sebastian added.
TEG Live Chief Executive Officer (CEO), Geoff Jones said, “2020 has been the most challenging year for the entire music and entertainment industry and so we are thrilled to present and partner with Guy Sebastian on the T.R.U.T.H. Tour in 2021. We’re very excited to bring live music and entertainment back in a much bigger way next year.  To quote one of Guy’s songs, live entertainment will be ‘taller, stronger, better’ – without a doubt!”
The tour will celebrate Sebastian’s newest album, T.R.U.T.H. which is due to be released on October 16th and available for pre order now. The album offers a profound look into the heart and vocal talent of one of Australia’s most popular and respected male artists and is loaded with smash hits, including the newest single ‘Love on Display’.
Undoubtably one of Australia’s most talented and popular male artists, Guy Sebastian first burst onto the music scene in 2003 when he was crowned as the first winner of Australian Idol. Since then, Guy has gone on to become one of the most successful artists in Australia.
To date, he has had 64 platinum-certified releases and has sold well over seven million singles and albums worldwide. He is also the only Australian artist to have ever achieved six number one singles and two number one albums in ARIA chart history.
This tour will be held with a commitment to a COVID Safe environment.  TEG LIVE will work closely with and comply with all requirements of the public health authorities in respect of these shows.
For more information on Guy Sebastian’s T.R.U.T.H. tour, visit:
https://www.teglive.com.au/
To stay up to date with news on Guy Sebastian, follow him on socials:
Instagram: instagram.com/guysebastian/
Facebook: facebook.com/guysebastian
Full show information and ticket on sale dates are as follows.

Event goers can take advantage of Ticketek’s world-leading partnership with Afterpay. Available via the Ticketek app or website, Afterpay is the world’s largest buy-now-pay-later service, offering fans greater flexibility to pay for tickets in four equal instalments and secure seats with the first payment.

ABOUT GUY SEBASTIAN:
Singer Songwriter and Producer, Guy Sebastian is undoubtedly one of Australia’s most popular and successful male artists. He is the only Australian male artist to have ever achieved six number one singles and two number one albums in chart history. He has been awarded over 64 platinum awards, he has performed for Oprah Winfrey, The Queen, and the Pope. His global hit ‘Battle Scars’ with Lupe Fiasco reached #1 on the US R&B/Hip Hop digital chart and peaked at #11 on the US iTunes Chart. The song is US certified platinum and was performed by the duo on The Late Show with David Letterman, Late night with Jimmy Fallon and on Conan & the ‘Play It Forward’ Grammy Foundation event in LA.
Guy opened a new musical chapter in late-2018 when he released ‘Before I Go’, following it up with his ARIA Award-winning & APRA Nominated single ‘Choir’ – a moving tribute to one of his mates, gone too soon – which peaked at #1 on the Australian iTunes Chart and #7 on the ARIA Singles Chart. Then ‘Let Me Drink’ (feat. The HamilTones & Wale) – single number three from Guy’s forthcoming record continued to dominate the airwaves and was the #1 most added track to radio at the time of release. And Sebastian’s dream run is set to continue.
Dripping with heart, soul and purposeful intent, Guy’s recent stunning single, ‘Standing With You’ is the spiritual salve we all need right now and as a result this smash hit is at the top of the ARIA and streaming charts.
In 2019 and 2020, Guy joined a panel of international mega pop stars Kelly Rowland, Boy George and Delta Goodrem on The Voice Australia as a Super star coach.  In November 2019, Guy Sebastian successfully hosted the 2019 ARIA awards to much acclaim and on the night was awarded two prestigious awards (Video Of The Year & Song Of The Year – Choir) out of four nominated categories.  In 2019, Sebastian was honoured with the distinguished Member of the Order of Australia Medal (AM) in the Queen’s Birthday Honors for his contributions to the Arts and Community.
Career Highlights: