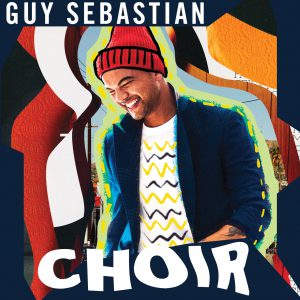 Last year Guy Sebastian lost a great mate and his musical right hand man, Luke Liang. Luke was a key member of Guy’s band, they toured locally and internationally together, and as someone who played every instrument beautifully, even teaching Guy a thing or two once in a while, and put together his live shows, the impact this life cut short too soon has been immense on Guy personally and professionally. Guy Sebastian’s poignant new single is a tribute to his friend Luke, someone Guy says lit up every room he went into.

“Luke made my life better and made life more fun. When I first sat down I was grieving and started writing a ballad and it was slow and it was just not Luke Liang, so I ripped it up and started again. I wanted to write something that was more joyful and that made people want to think of his life and celebrate it rather than feel grief, because I know he wouldn’t want that.” Sebastian laughs fondly. “So that’s where ‘Choir’ was born, which is poignant but fun and uptempo.”

With its big, rousing choral chorus, it’s a soulful, glorious celebration of a friend of Sebastian’s, while also keenly resonating with anyone who has grieved loss. While the lines, “Too busy to call, we’ll catch up next week/Then it gets to next week/And we say maybe next week,” may be full of reflection and regret, ‘Choir’ is an upbeat, heartfelt and joyous tune drenched in the happiness and energy “life of the party” Liang brought to those around him.

‘Choir’ follows on from Sebastian’s anthem of fierce determination, ‘Before I Go, released at the tail end of 2018. The Platinum-selling ‘Before I Go’ has been in the Australian radio airplay charts for the past 24 weeks, while Sebastian has had a hit with it in Europe with it peaking at Number One on the iTunes charts in the Netherlands, where he also performed this on The Voice earlier this year. The tune has also had 19 million streams, with half of those being international.

So with an ever-expanding CV – which now include his inaugural Australian Idol victory, a Eurovision Song Contest top-five appearance, a long stint as an X Factor judge, his family charity The Sebastian Foundation, more than a million albums sold, six ARIA Number One singles and, now, as coach on The Voice – the 37-year-old is still driven by his main passion: making music that matters. To him and to others.

“I’m in a place with my music now where I just want to make soulful music that resonates and moves people,” he says. “And I’m happy this song will bring some healing to people who have lost others.”

Sebastian is soon to announce touring plans as well as even more exciting developments in a career that remains at the top of his creative space. His is a voice that continues to show its strength, soulfulness and resilience, and ‘Choir’ is a part of this next chapter.

**Lifeline is an anonymous and confidential 24-hour crisis support line. You can call Lifeline to discuss all types of personal difficulties, including thoughts of suicide, 24 hours a day, seven days a week. Lifeline provides immediate support by phone, via online chat or face to face. Call 13 11 14 or visit lifeline.org.au.