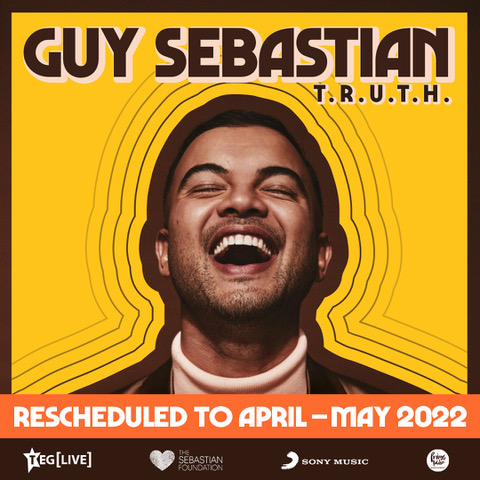 GUY SEBASTIAN – T.R.U.T.H. NATIONAL TOUR RESCHEDULED TO APRIL/MAY 2022
TEG Live advises that multi ARIA award-winning singer-songwriter Guy Sebastian’s T.R.U.T.H. Na- tional Tour, set to tour Australia in November / December 2021, will move to April and May 2022.
Managing Director of TEG Live, Tim McGregor states, “Whilst this decision was not made lightly, the ongoing COVID restrictions on mass gatherings and interstate travel make a tour of this size im- possible in the current environment. The safety and wellbeing of fans, touring crew and venue staff remain our highest priority.”
Tickets purchased for the November / December 2021 concerts remain valid for the rescheduled dates (listed below) without need for exchange. Ticket holders will be emailed with their new dates, and will not need to take further action.
Guy Sebastian added, “I am obviously really disappointed to have to reschedule this tour. It’s the biggest tour I’ve ever embarked on and I have been blown away with the response. It really does highlight that people do turn to music in challenging times. It takes a lot of hard work from many people to make a tour like this possible and it saddens me that we are just not in a position to make it happen for 2021. We will have to wait a little longer and I can promise you, the wait will be worth it! I can’t wait to bring joy and music to the people who have supported me the most. I am so thankful for all the love and support. I can not wait to get back on the road when it’s safe to do so. Sending much love to everyone.”
Tickets purchased for the November / December 2021 concerts remain valid for the rescheduled dates below:
T.R.U.T.H. NATIONAL RESCHEDULED TOUR DATES Newcastle Entertainment Centre, NSW
Thursday 4 November 2021 now valid for Friday 22 April, 2022
Brisbane Entertainment Centre, QLD
Friday 5 November 2021 now valid for Saturday 14 May, 2022
Gold Coast Convention & Exhibition Centre, QLD
Saturday 6 November 2021 now valid for Friday 13 May, 2022
Aware Super Theatre at ICC Sydney, NSW
Friday 12 November 2021 now valid for Friday 29 April, 2022 Saturday 13 November 2021 now valid for Saturday 30 April, 2022 Sunday 14 November 2021 now valid for Sunday 01 May, 2022
Bendigo Stadium, VIC
Wednesday 17 November 2021 now valid for Wednesday 04 May, 2022
Margaret Court Arena, Melbourne, VIC
Friday 19 November 2021 now valid for Friday 20 May, 2022 Saturday 20 November 2021 now valid for Saturday 21 May, 2022 Sunday 21 November 2021 now valid for Sunday 22 May, 2022
Adelaide Entertainment Centre Arena, SA
Wednesday 24 November 2021 now valid for Friday 06 May, 2022
RAC Arena, Perth WA
Friday 26 November 2021 now valid for Saturday 07 May, 2022
MyState Bank Arena, Hobart, TAS
Sunday 28 November 2021 now valid for Wednesday 18 May, 2022
Cairns Convention Centre, QLD
Tuesday 30 November 2021 now valid for Tuesday 10 May, 2022
Townsville Entertainment & Convention Centre, QLD
Wednesday 1 December 2021 now valid for Wednesday 11 May, 2022
For Ticketek General Public On-Sale (all shows except Wollongong), please click here.
For Wollongong tickets via Ticketmaster, please click here.
For more information on Guy Sebastian’s T.R.U.T.H. Tour, visit: https://www.teglive.com.au/
Guy’s number one album, T.R.U.T.H., is available to buy, download and stream now,
To stay up to date with news on Guy Sebastian, follow him on social media: Instagram: instagram.com/guysebastian/
Facebook: facebook.com/guysebastian
FOR FURTHER INFORMATION PLEASE CONTACT: Angela Ceberano
Flourish PR
angela@flourishpr.com
Mobile: 0419774067
ABOUT GUY SEBASTIAN:
Singer Songwriter and Producer, Guy Sebastian is undoubtedly one of Australia’s most popular and successful male artists. He is the only Australian male artist in ARIA history to have ever achieved six number one ARIA singles, and three number one albums. He has been awarded 7 ARIA awards, 69 Platinum Certification awards, 8 Gold Certification awards, and has performed for Oprah Winfrey, The Queen, and the Pope. His global hit ‘Battle Scars’ with Lupe Fiasco reached #1 on the US R&B/Hip Hop digital chart and peaked at #11 on the US iTunes Chart. The song is US certified platinum and was performed by the duo on The Late Show with David Letterman, Late night with Jimmy Fallon and on Conan & the ‘Play It Forward’ Grammy Foundation event in LA.
Guy opened a new musical chapter in late 2018 when he released ‘Before I Go’, following it up with his ARIA Award-winning & APRA Nominated single ‘Choir’ – a moving tribute to one of his mates, gone too soon. ‘Choir’ which peaked at #1 on the Australian iTunes Chart and #7 on the ARIA Singles Chart. Dripping with heart, soul and purposeful intent, Guy’s single, ‘Standing With You’ was the spiritual salve we all needed, and as a result this smash hit stormed to the top of the ARIA and streaming charts. Guy’s stunning 7thnew single, ‘Believer’, also lifted from the #1 ARIA album, T.R.U.T.H., is a deeply personal song, penned for his wife Jules. ‘Believer’ is fast becoming a much loved song on radio, and continues to dominate in streams around the world.
In 2021, Guy returned to The Voice Australia as a super star coach and mentor, joining a panel of in- ternational mega pop stars Keith Urban, Rita Ora and Jessica Mauboy. In November 2019, Guy Se- bastian successfully hosted the 2019 ARIA awards to much acclaim and on the night was awarded two prestigious awards (Video Of The Year & Song Of The Year – Choir) out of four nominated cate- gories. In 2019, Sebastian was honoured with the distinguished Member of the Order of Australia Medal (AM) in the Queen’s Birthday Honors for his contributions to the Arts and Community.
Career Highlights:
ABOUT TEG LIVE:
TEG Live is wholly owned by TEG, Asia Pacific’s leading ticketing, live entertainment and data analytics company. TEG Live is a dynamic and diverse promoter of live content in music, sport, family entertain- ment, eSports and exhibitions. TEG Live connects millions of fans every year with unique live experi- ences and adds value to events with hospitality and sponsorship services. For more infor- mation: http://www.teglive.com.au